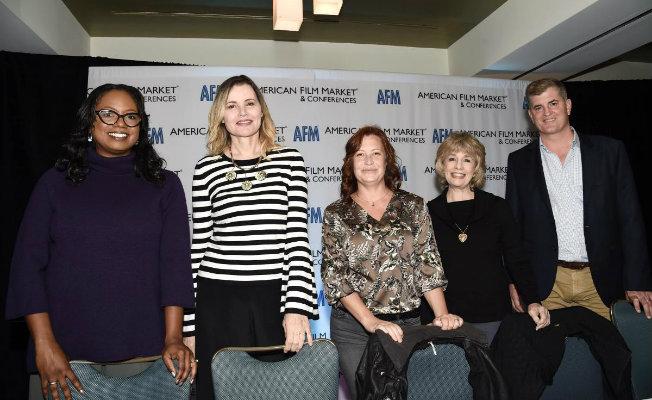 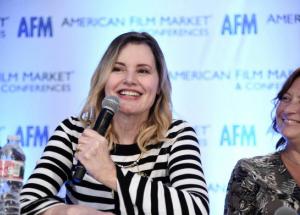 Known for drumming up business, the recently concluded American Film Market & Conferences also generated food for thought, particularly during an AFM session presented in partnership with the Alliance of Women Directors. Titled “The Future Is Female,” the panel discussion identified problems in the marketplace as well as signs of progress–both of which were touched upon, for example, by Jennifer Warren, chairperson and founder of the Alliance of Women Directors, in her introductory remarks.

Warren noted that 94 percent of feature films are directed by men. This lack of parity in the workplace is detrimental to society, she affirmed, citing the importance “for women and girls growing up to have role models and to see things from a woman’s point of view.”

She added that striving for hiring parity is good business, as proven by FX which instituted a program to get women to direct half of its content. Last year, said Warren, FX attained that 50-50 balance and saw its ratings go up 15 percent. Contending that a woman’s POV offered a fresh perspective to storylines and characters, helping to boost Nielsen numbers, Warren then turned the stage over to discussion moderator Wendy Calhoun, a Writers Guild Award nominee (and producer) for Nashville and Justified, and four panelists: Geena Davis, an Oscar-winning actress (The Accidental Tourist), who founded the Geena Davis Institute on Gender in Media; director Jen McGowan (Kelly & Cal, the upcoming Rust Creek); and Catherine Hand and Jim Whitaker, producers of A Wrinkle in Time, the Disney feature slated for release in March 2018. Based on the novel of the same title by Madeleine L’Engle, A Wrinkle in Time is the first feature with a budget of $100 million-plus to be directed by a woman of color, with that historic achievement being made by Ava DuVernay. A Wrinkle in Time features a cast which includes Oprah Winfrey, Reese Witherspoon, Mindy Kaling and Chris Pine.

Davis noted that the launch of the research institute bearing her name was sparked in part by her noticing that children’s programming seemed to feature a disproportionate number of male characters. She saw the need for delving more deeply into this from a research standpoint, confirming that “there are profoundly more male characters than female characters in the content we are showing our kids. Female characters don’t take up half the space, aren’t doing interesting things, aren’t leaders, are more hypersexualized…The worst  ratio of male to female characters is in what’s aimed at kids 11 years old and under. We are training kids from the beginning to have unconscious gender bias.”

Feature films also don’t have much to boast of when it comes to casting diversity. According to Davis, “The ratio of male to female characters in film has been exactly the same since 1946.” She noted that most think the percentages have gotten better when there have been certain turning points over the years such as Ridley Scott’s Thelma & Louise, featuring two strong female characters, including Davis’ Oscar-nominated performance as Thelma. “You think that this [breakthroughs like Thelma & Louise] changes everything but nothing has changed,” said Davis.

Still she thinks that exposing gender bias and its negative impact on casting and society has resulted in more people proactively looking to improve the situation–but that’s not necessarily the case when it comes to those who have the power to hire directors. “Directing is a completely different problem that I don’t think is unconscious. People who are creating content that is gender biased are horrified to find out and immediately want to do better. The fact that there are no women directors is not a secret and hasn’t been for decades yet no one is making the change.”

Technology is also advancing to help the Davis Institute in its endeavors. “We have a brand new tool that never existed before to do our research with–Google gave a grant to develop the software that uses face and voice recognition to tell us how many female and male characters are in film and television, but also how much screen time they have and how many lines they have, down to the millisecond. It is very revealing and horrifying; far fewer characters are female and the ones that are, are on-screen less and talk less.”

On the casting front, Davis shared several other insights with AFM attendees. “In movies with female leads, the male supporting character is onscreen an equal amount, however if there is a male lead, the female counterpart is only on-screen 25 percent of the time.”

Davis continued, “When women are talking, they are onscreen less than when men are talking (the shot is cutting to something else), so now we need to talk to the editors! Unconscious bias is happening on every possible level.”

Moderator Calhoun, who’s currently working on a Grey’s Anatomy spinoff, said that re-writing certain characters to be female instead of male in TV and features, can help to address the situation.

Director McGowan said she  makes it clear on her projects that diversity is a must. “I do not want to see an all white, all straight, all male crew.”

Sadly, coming up the commercialmaking ranks, McGowan witnessed a profound lack of women. “For 20 years I worked in commercials; I never worked with a female first AV, grip department, electrical, and only three female directors (and only one who worked regularly). Those are all union and really high paying jobs, jobs that filmmakers use to supplement creative careers, and those are completely shut off to women.”

McGowan has set up Film Powered, a networking and skill sharing tool for female professionals in the industry. It is a free, membership based community of over 1,300 vetted women offering classes, social events and job postings designed to increase the skills and strengthen the contacts of and relationships between its members in an effort towards gender parity in the business. She advised AFM session attendees to check out her filmpowered.com site.

A Wrinkle in Time
Producers Hand and Whitaker discussed A Wrinkle in Time, a film which has been a lifelong dream for Hand whose storied career includes collaborating over the years with iconic TV series creator Norman Lear.

“When I was a little girl,” recalled Hand, “I read ‘A Wrinkle in Time’ and I thought it would make a great movie so I wrote a letter to Walt Disney to say he should make the film and that I wanted to play Meg. I never sent the letter and on December 15, 1966, when he passed away, I cried because I felt so guilty for not sending it, because no one else would make that movie. That day I promised myself I was going to grow up and find someone to make it. That was 50 years ago.”

It was worth the wait as Hand and Whitaker both said they treasured the experience of working with DuVernay. Hand said that DuVernay make it a point to seek out female and minority talent for her crew. For industry vet Whitaker, DuVernay was the first woman director with whom he’s collaborated. “It’s been an incredible experience,” he assessed–so much so that Whitaker is gearing up for a feature which too will have a female director. He provided some backstory for the pending project which he wasn’t yet at liberty to publicly discuss in full detail.

Whitaker, shared, “Most of my other films, candidly, were male driven films; can’t say that was by design; it comes down to the stories, finding stories that have, for me, an emotionality and hopefulness. I’m working on a story now that is all female…and an incredible true story; I would say influenced by the experience on Wrinkle, we made a contractual necessity that a female director make the film. It’s important for stories to be told from female perspective in general, not just for female-driven stories.”

Hand sees cause for optimism. “I think that the world is changing and we are in a really wonderful time. Women are in more powerful positions and have the pocketbook more than ever before.” She added, “Middle aged women are a market; when they start to realize we matter, they start to make product for us.”

Hand offered aspiring women filmmakers a simple piece of advice. “Don’t give up.” Alluding to the ability to post work and find audiences online, Hand affirmed, “In today’s world, you have so many opportunities to be heard.”

Increased attendance
Exhibitor and attendee numbers were up at the overall AFM. In total, 7,415 participants visited the event’s prime venue, the Loews Hotel in Santa Monica, as attendance rose by 6%. The market also saw 1,476 buyers arrive from 71 countries with China and Taiwan each seeing growth of 35% more buyers.

Overall exhibitor participation was up 18% with 445 registered exhibiting companies, with the largest number of exhibitors arriving from the United Kingdom, France, South Korea, and China, after the U.S.

In addition to “The Future Is Female,” AFM Roundtables included sessions on Documentaries, Faith & Family films and LGBTQ representation in cinema.

The newly introduced Writer’s Workshop also proved to be a highly popular addition to the AFM experience with instructors from USC and UCLA teaching audiences of 400.

The AFM Campus was busier than ever as attendees took in screenings of 337 films (40 more than last year), including 264 market premieres and 61 world premieres. An additional 78 films screened on demand.

The American Film Market & Conferences is produced by the Independent Film & Television Alliance.