Posted on May 22, 2017 by Sheree L. Ross
‘Everything, Everything’s Women Of Color Aren’t Stereotypes, According To Star Anika Noni Rose 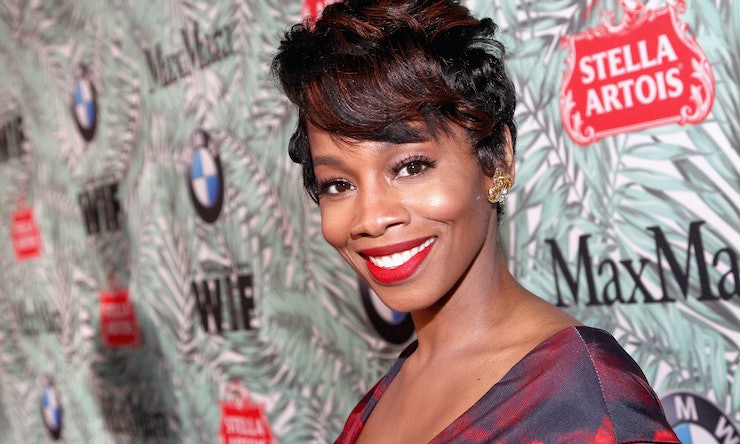 Over the course of her career so far, Anika Noni Rose has played every kind of role under the sun, from a Disney princess (The Princess and the Frog) to an aspiring singer (Dreamgirls) to a fierce, uncompromising lawyer (The Good Wife). And in her newest film, the adaptation of the YA bestseller Everything Everything, she switches gears yet again, playing a loving mom who puts her daughter’s needs before, well, everything else. Rose has a resume filled with complicated, fascinating parts, but that’s not the norm for non-white female actors, a fact of which the actor is very well aware.

“I think very often women, in particular black women, are only shown a certain amount of things that they are welcomed into by the industry,” Rose says, speaking via phone in late April. But, she adds, “I’m hoping that that’s changing now. I think that [Everything, Everything] is very different, and not the way that you would generally see young women of color, including not just Amandla [Stenberg], but both my character and the nurse. You’ve got three women of color here who are not seen in the way that we generally are on screen, and I think that that’s a beautiful thing.”

Indeed, Everything, Everything features a cast that’s actually reflective of real life, with, as Rose notes, the three lead female roles played by women of color, and the majority of the parts in general being played by women. Nick Robinson’s Olly, the teenage love interest to Stenberg’s Maddy, is one of the only men to appear on-screen, and this reversal of the Hollywood norm is due in part, Rose says, to the film having both a female director and a female writer behind the source material.

“It was wonderful to be on a set working directly with women and having conversations within the film, real conversations, with another woman, which so often does not happen,” the actor recalls. “There’s a statistic, just speaking on television: only 10 percent of those speaking roles are women of color, and that’s not even necessarily a conversation. You know: ‘Dr, your patient is here,’ or ‘Hi,’ or ‘Did you get the bread?’ That is considered speaking, and that’s not life on screen. That’s not real life. ”

“It was really amazing and wonderful to be able to have true conversation, not only with Amandla, but with Ana de la Reguera,” she continues. “It’s a gift.”

With a script full of roles that gave its female stars actual material to work with, Everything, Everything certainly stands out from so many of its big-screen peers. Its plot, as well, is unique; about a teenage girl who suffers from a condition that makes her allergic to the outside world, the film is a drama, romance, and suspense story all mixed in one. Rose, who plays Maddy’s mother and doctor, was drawn to the film’s originality — “it’s tender, it’s romantic, it’s intimate without being highly, overly sexual, as sometimes teenage films can be,” she explains — as well as its story of Maddy’s personal and romantic growth. “I’m interested in showing all facets of who we are as women, growing and morphing and changing and being affected by the world,” Rose says.

And luckily, she’s picking projects like Everything, Everything that allow her — and the many women of all different races and ages around her — to do just that.