As a child Memphis filmmaker Rachel M. Taylor imagined that she’d grow up and direct a Star Wars-caliber movie. She didn’t realize back then that her ambition would carry her into an industry where the DNA still skews predominantly pale and male.
She just wanted to grab a camera and shoot the kind of geeky, sci-fi flicks she’s always loved – the kind that not enough women are filming these days, to her chagrin. 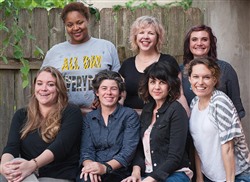 That helps explain why she also doesn’t just want to shoot her own projects – shorts like her dark fantasy “Avarice,” which she released in 2012 – and hope that other women follow suit.

Taylor – who’s been a filmmaker for six years now – is today part of an international collective of female directors working to create more opportunities for women in the film industry. They call themselves Film Fatales, part of a larger Film Fatales organization founded in New York City in 2013 that’s expanded to include what are now dozens of chapters around the world.

The Film Fatales Memphis group got started in June. Earlier this month, the group also launched a speaker series at Crosstown Arts at which local Deputy Film Commissioner Sharon Fox O’Guin was on hand to address the group about topics like resources the Memphis-Shelby County Film Commission can make available to independent filmmakers.

The next speaker in the series is entertainment lawyer Anita Modak-Truran set for May.

Going forward, Taylor says occasional speaker events like those will break up what are otherwise monthly meetings by the group to catch up with each other, share resources, collaborate on projects, swap stories and more.

That also, in a way, encapsulates the purpose of Film Fatales. In short, Taylor says, it’s about community, lending a hand and helping potentially opening doors for each other.

“My dream as a kid was to direct something like the Lord of the Rings or Star Wars,” Taylor said. “I didn’t realize until I got older that just doesn’t tend to happen for a woman. I think that’s starting to change, but not fast enough.”

Indeed, figures cited by The New York Times last month would seem to bear that out. Reporting on the findings of a new study on gender equality in the film industry compiled by San Diego State University, the newspaper reported that 9 percent of the directors of the 250 highest grossing domestic films in 2015 were women.

A small showing, but still an improvement over 2014 when the figure was only 7 percent.

That’s partly why New York filmmaker Leah Meyerhoff launched the Film Fatales organization in the first place and why it’s so touched a chord that today its chapters extend across the U.S. and as far away as Europe and beyond.

Hearing about the Film Fatales at a panel session during the South by Southwest confab in Austin, Texas, is what gave Taylor the idea to see if a chapter could be launched in Memphis.

“I emailed Leah, and from there it’s taken off,” she said about the group. “I’d like to grow it more.

“For us, we realized very early on that having that community is so important. There’s also a chapter in Wellington, New Zealand, which is great because I’m interested in filmmaking there and now there’s a group I can contact. There’s just a huge network.”